Nǐ hǎo and welcome to China!

Apologies for no Bahrain recap – it was on at 2am local time and I have a full time job that doesn’t allow me the luxury of staying up until 4am to watch the grand prix. Also, I’m too old and too tired to wake up mid-sleep to attempt to write a semi coherent blog post. Admittedly, I could have watched a replay or a highlights package but it’s just not the same when you already know the outcome, fam.

But never fear! I was wide awake are raring to go for this weekends race…

LIGHTS OUT AND AWAY WE GO!

We got yet ANOTHER race start with a clean first lap. That’s right ladies and gents, no crashes and no retirements. Astounding. 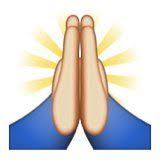 Sebastian Vettel in the Ferrari bolted out the gate, popped in a fastest lap and essentially said “Bye Felicia” to the rest of the field.  It is however worth mentioning that he squeezed his teammate Kimi Raikkonen like a fresh orange out to the track limit which was, in a word, rude.

The Renault’s of Carlos Sainz and Nico Hulkenberg decided that the real race was actually just between the two of them and Lance Stroll in the Williams somehow made up five places is one lap with is a mammoth effort by the young maple leaf.

Not a lot happened for a while in the early stages of the race if I’m being perfectly honest. McLaren’s Fernando Alonso took on Romain Grosjean in the Haas a few times but never quite managed to make the overtake stick, a few people pitted, stuff happened IDK.

Red Bull went double dutch on Max Verstappen AND Daniel Ricciardo’s pit stops, meaning they changed eight tyres in the space of about 10 seconds.  I can’t even put shoes on my own two feet within 10 seconds.

Mercedes then went for the undercut on Ferrari in response to Red Bull, or as I like to call it the “Oh shit, someone else pitted now we gotta do that too”.

Ferrari decided to stay out and enjoy being in first and second position for just a lil longer, essentially delaying the inevitable. Eventually they pulled Sebastian Vettel in for a fresh set of tyres and the pit stop was understandably a little on the slow side which resulted in him re-joining the race in third behind the Mercedes of Valtteri Bottas. The commentators claim that Ferrari we’re “caught napping” and stuffed up their race, but true tifosi know that this is now simply referred to as “The Ferrari Strategy”.

I feel it’s worth noting that Kimi Matias Raikkonen stayed out on his first set of tyres until lap 28 which was one hell of an effort but also, just, like, WHY FERRARI?

Further down the field the Sauber of Charles Leclerc spun, and the two Toro Rosso’s of Pierre Gasly and Brendon Hartley had a fender bender resulting in a SAFETY CAR!!!!!!!!

Drink every time there’s a safety car in F1.

Red Bull yet again pulled the double dutch in the pit lane with Daniel Ricciardo and Max Verstappen who, not wanting to waste a single second in the pits, overtook Pierre Gasly in the pit lane entrance.

The safety eventually car buggered off on lap 35 and it was on for young and old in the mid-field with Fernando Alonso in the finally getting around Romain Grosjean, then towards the front Daniel Ricciardo lunged past Kimi Raikkonen for fifth position.

Max Verstappen went in on Lewis Hamilton in the Mercedes but had to run wide after the door was firmly closed on his overtaking efforts.

True blue Aussie legend Daniel Ricciardo, on the other hand, gets the job done on Lewis Hamilton and absolutely sends it through the hairpin only to charge like a literal bull at  Sebastian Vettel who he overtakes for second spot and set his sights on the number one spot aka Valtteri Bottas’ Mercedes.

Max Verstappen, freshly inspired by his teammate, flew past the Mercedes of Lewis Hamilton and honed in on Sebastian Vettel’s Ferrari.

It was at this moment he knew he fucked up.

Max Verstappen and Sebastian Vettel made contact and spun in a beautiful display of synchronised driving.  Said spin opened up a gap for Lewis Hamilton and Kimi Raikkonen and those boys know an opportunity when they see one.

From here on in the race was wild y’all.

Daniel Ricciardo overtook Valtteri Bottas to lead the race thanks to yet another magic overtake, Max Verstappen got back in the game and overtook Lewis Hamilton for fourth spot but copped a ten second time penalty for his pirouette and then Kimi Raikkonen activated Battle of the Finns mode and got all up in Bottas’ grill to challenge for second.

You still with me?

Hartly retired with only three laps to go which was a bit shit because by some blessing of the F1 gods we had managed to keep all 20 cars running in China up until that point.

AND THEN Fernando Alonso. Overtook. Sebastian Vettel. For Seventh. 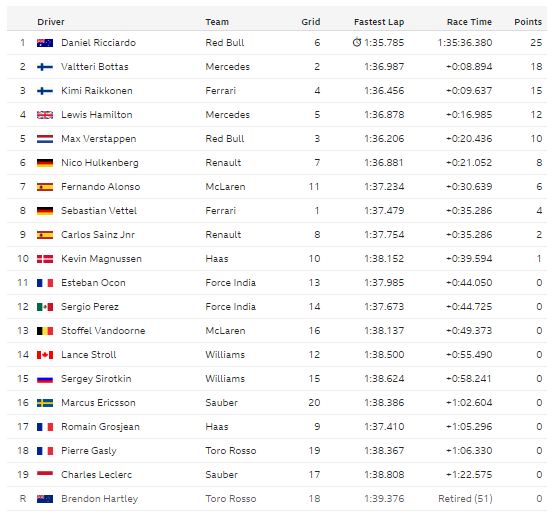 The Australian anthem played on the podium, Daniel Ricciardo cried and shoeys were drunk.

What a result for Dan the Man, the dude barely made it on track for qualifying after a turbo failure in free practice and then put in a masterclass performance to stand atop the podium.

Next stop BAKU! Keep your fingers and toes crossed that this year’s Azerbaijan grand prix is as batshit crazy as last year…