Anyone else getting deja vu? Hamilton…Vettel…Rosberg…

Qualifying at the Sepang circuit started out relatively normal by F1 standards with poor Manor Marussia hampered by more difficulties  – but hey! Silver lining: they made in onto the track this weekend. Maybe next race weekend they’ll get a full run in Q1? Who knows.

Sadly McLaren Honda didn’t exceed expectations (at least not mine) but it’s always such a shame to see former world champions out of the running so early on.

SPEAKING OF WHICH lets all give a special shout out to Sauber’s Marcus Ericsson for being the ultimate traffic marshal and pushing Ferrari’s Kimi Raikkonen out of Q2 and into P11. I mean honestly after the weekend Kimi had in Australia you’d think some sort of karmic force would have been on his side. Apparently not.

In all honesty Q2 at Sepang is one of the best qualifying sessions I’ve seen in a long time and it lasted all of a lap. As WTF1 so eloquently tweeted “More overtaking than the Australian Grand Prix in this qualifying session“. The impending storm made for an electrifying lap (punny!) with the remaining drivers getting out on track and going for broke before they got washed out. Basically rookies and back-markers out qualifying world champions with Rosberg, Vettel, Bottas, Ricciardo (no real surprises there) followed by Grosjean (what?!) then Massa, Verstappen (Seriously. He’s 17. That’s friggin’ amazing), Hamilton (AWKWARD), Kvyat and Ericsson. Next thing you know it’s all thunderbolts and lightning very, very frightening. Q2 is done and dusted and you’re just sitting there looking at the results going “What…what just happened?” 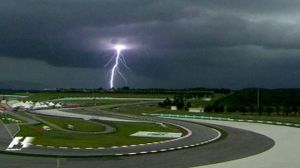 After a brief interval the rain decides it’s fucked enough peoples shit up and moves on with it’s life. Track clears and Q3 gets under way. Generally the teams play around their tire choices – Wets? Inters? Wets? Inters. Somewhere in the confusion a tear in the space-time continuum occurs and suddenly we’ve got the exact same qualifying result as we did in 2014 with Hamilton on pole, Vettel just missing out on the honour and taking second leaving Mercedes lesser loved child Rosberg in third. Except this time Vettel’s gone and done it in the Adrian Newy-less Ferrari. BOOM.

Rounding out the field are the two Red Bulls of Ricciardo and Kvyat, followed by Toro Rosso wonder child Verstappen, Williams bros Massa and Bottas are split up by Lotus fun police Grosjean and finally Sauber’s Ericsson rounding out the motley crew.

The space-time continuum will keep on doing it’s thing and the results of the Malaysian GP 2015 will be the same as the Malaysian GP 2014: Hamilton for Mercedes, Rosberg for Mercedes and Vettel for Ferrari. Alonso and Button of McLaren Honda will limp their cars across the line, somewhere towards the back of the field (it pains me to write that) and hopefully we see some excellent scraps for points between Williams, Ferrari, Red Bull and the rookies.

Honourable mention goes to Niki Lauda for his next level meteorology skills of removing his trademark cap to check if it was raining or not, Jenson Button’s amazingly gross moustache and for Fernando Alonso getting the absolute shit scared out of him by a loud thunder clap during a live interview.